I haven’t posted a movie post in a really long time, I don’t know why-considering I’ve done nothing but watch movies all winter. We’re working down a list of favorites, so I’ve got to give my boyfriend credit for quite a few of these {with the exception of Real Women Have Curves-great film, by the way} Here are 6 I’ve seen recently that can help kick start your weekend. 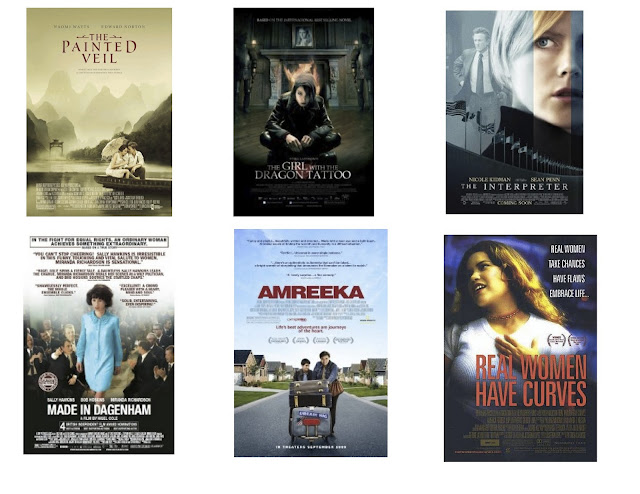 The Painted Veil: A British medical doctor fights a cholera outbreak in a small Chinese village, while also being trapped at home in a loveless marriage to an unfaithful wife.
The Girl With The Dragon Tattoo: A journalist is aided in his search for a woman who has been missing — or dead — for forty years by a young female hacker.
The Interpreter: Political intrigue and deception unfold inside the United Nations, where a US Secret Service agent is assigned to investigate an interpreter who overhears an assassination plot.
Made In Dagenham (now out in select theaters..go see it!) A dramatization of the 1968 strike at the Ford Dagenham car plant, where female workers walked out in protest against sexual discrimination.
Amreeka: A drama centered on an immigrant single mother and her teenage son in small town Illinois.
Real Women Have Curves {early America Ferrera, good stuff!} Coming of Age story of a first generation latina Ana García (America Ferrera) who struggles to balance her family’s culture where she is expected to work in her sister’s dress warehouse, find a husband and have children and forget her dreams of a college education.
Stay Connected! The easiest way for me to follow my favorite sites is by following them on Facebook or Twitter.  Come on over and join the fun!
Share
Pin it
Share
Share

Warmer temperatures call for less makeup, fewer articles of clothing, and less clutter to carry around. Give your over-sized tote a summer vacation and pick up a lightweight clutch instead.…
READ MORE
0
0
0
When I met Ahmad a few months ago I instantly noticed his sense of style. But even as a regular thrifter, I would have never guessed he was an avid…
READ MORE
0
0
0
The older I get, the more I find myself drawn to basics instead of trends. Over the last few years, I’ve accumulated quite a few trendy items that end up…
READ MORE
0
0
0
Although the most important part of an album lies on the inside, the cover serves as a medium by which the listener is prepared for an enjoyable audible experience.  The outside…
READ MORE
0
0
0