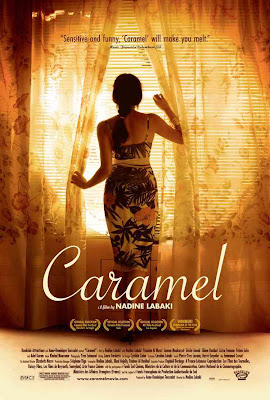 I had never heard of this film before unintentionally choosing it on Netflix. I love independent films, and adore independent films about the Middle East even more. Naturally, they are more relatable for me and I enjoy watching the advances and growth in that part of the world. I am so glad I stumbled across this film.

Caramel, which is loosely translated to “Sukkar Banat” in Arabic, literally means “sugar girls.” This Lebanese independent film is entirely in Arabic with english subtitles, something I tremendously enjoyed.  As most indie films are, it was slow paced, beautifully shot while showcasing a lot symbolism. It follows the lives of five beautiful Lebanese women who live double lives and struggle with issues most women can relate to: love, aging, secrets, and sexuality. The director of the film, Nadine Labaki, also plays the main character who’s failed attempts at pursuing a married man leave her realizing the consequences of her actions.

In this light hearted romantic comedy, three of the five women work in a salon, which is where the metaphoric film title is derived. Sukkar, or sugar is a translation for the mixture of sugar, lemon, and water which forms into a waxing paste commonly used in that part of the world, and is what the women use at the salon to remove unwanted hairs for their clients. “It’s this idea that something sweet burns and hurts you” Labaki explains in an interview. It’s a bittersweet notion, “this eternal quest for beauty that sometimes makes you suffer.” She says. And boy is she right, if you’ve ever used this type of homemade wax, suffering is an understatement, but the results are quite eminent.

I appreciated this film because it showed the Middle East in a different light. No war zones, no religious over kill, but simply the story of five regular women, who are bound by friendship, love, and waxing paste.  The actors all are non-professional actors, everything seemed so natural that you felt like you knew someone just like that. Not to mention, the music is pure genius.

Besides the fact that most of the women in the film are complete knockouts, I admired the main character’s style, Layale (Nadine Labaki). Her effortless beauty and style left me craving summer florals, subtle daytime smokey eyes, thick arched eyebrows, excessive bangles, and soft natural waves. I would love to have hair like hers and have even invested in some hot rollers for fine hair to get the wavy hair of my dreams. Summer, where are you?

When I met Ahmad a few months ago I instantly noticed his sense of style. But even as a regular thrifter, I would have never guessed he was an avid…
READ MORE
0
0
0
{lovely photo via} One of my fondest memories about growing up in Jordan was experiencing the music scene. Sure, I was an overly emotional pre-teen with more mood swings than…
READ MORE
0
0
0
Like many, my hair has gone through various styles over the years.  I’ve had layers, heavy bangs, side swept bangs, no bangs, a bowl haircut – I even had the…
READ MORE
0
0
0
[wp_cart_button name=”Mossimo Nude Flat” price=”20″ shipping=”8″]   Size 9 New with tags
READ MORE
0
0
0